What is a Cobot (Collaborative Robot)?

Invented in 1996 by J. Edward Colgate and Michael Peshkin, professors at Northwestern University. Their 1997 US patent entitled “Cobots” describes “an apparatus and method for direct physical interaction between a person and a general purpose manipulator controlled by a computer.” The invention resulted from a 1994 General Motors initiative led by Prasad Akella of the GM Robotics Center and a 1995 General Motors Foundation research grant intended to find a way to make robots or robot-like equipment safe enough to team with people. The first cobots assured human safety by having no internal source of motive power. Instead, motive power was provided by the human worker. 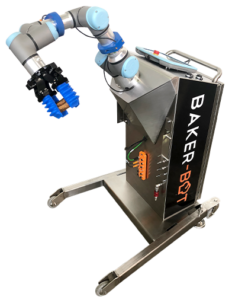 Unlike industrial robotics, where the industrial robots are meant to work at a very fast pace, carry heavy payloads and require safeguarding with cages, Cobots, or Collaborative Robots were designed and intended to safely work alongside humans in a production environment, for example, at a conveyor line in a bakery or food manufacturing plant — lifting and depanning trays, palletizing, targeted filling and depositing, decorating, and pick and place applications such as primary and secondary packaging.

Design elements like lightweight construction, slower working speeds, limited force and movement sensors help keep the work environment safe between cobots and humans. In other words, Cobots are meant to work within a shared space in close proximity with humans without fear of being injured.

Because of their inherent portable design, cobots can freely move within a production environment from task to task, depending on software and end effectors (end of arm attachments).  And as you can imagine, Cobots have many, many uses but for the purposes of the informative webpage, the bakery, food, dairy and pharmaceutical industry can benefit from cobots the following ways: 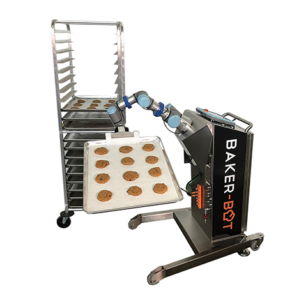 There has been some wide spread confusion around the use and set up of cobots. Although it may seem that anyone can order a robotic arm from a robotic manufacturer such as Universal Robotics, Omron or many others, the arm itself is useless until proper software development and implementation has been applied by the way of controls.

Apex Motion Control offers plug in play standard cobots, or custom configured cobots that perform all the above mentioned tasks — the Baker-Bot is one such cobot that has gained the reputation as the go to cobot for bakery and food manufacturing.

If you have any questions about cobots, robotics and machine automation please contact us here with your questions.